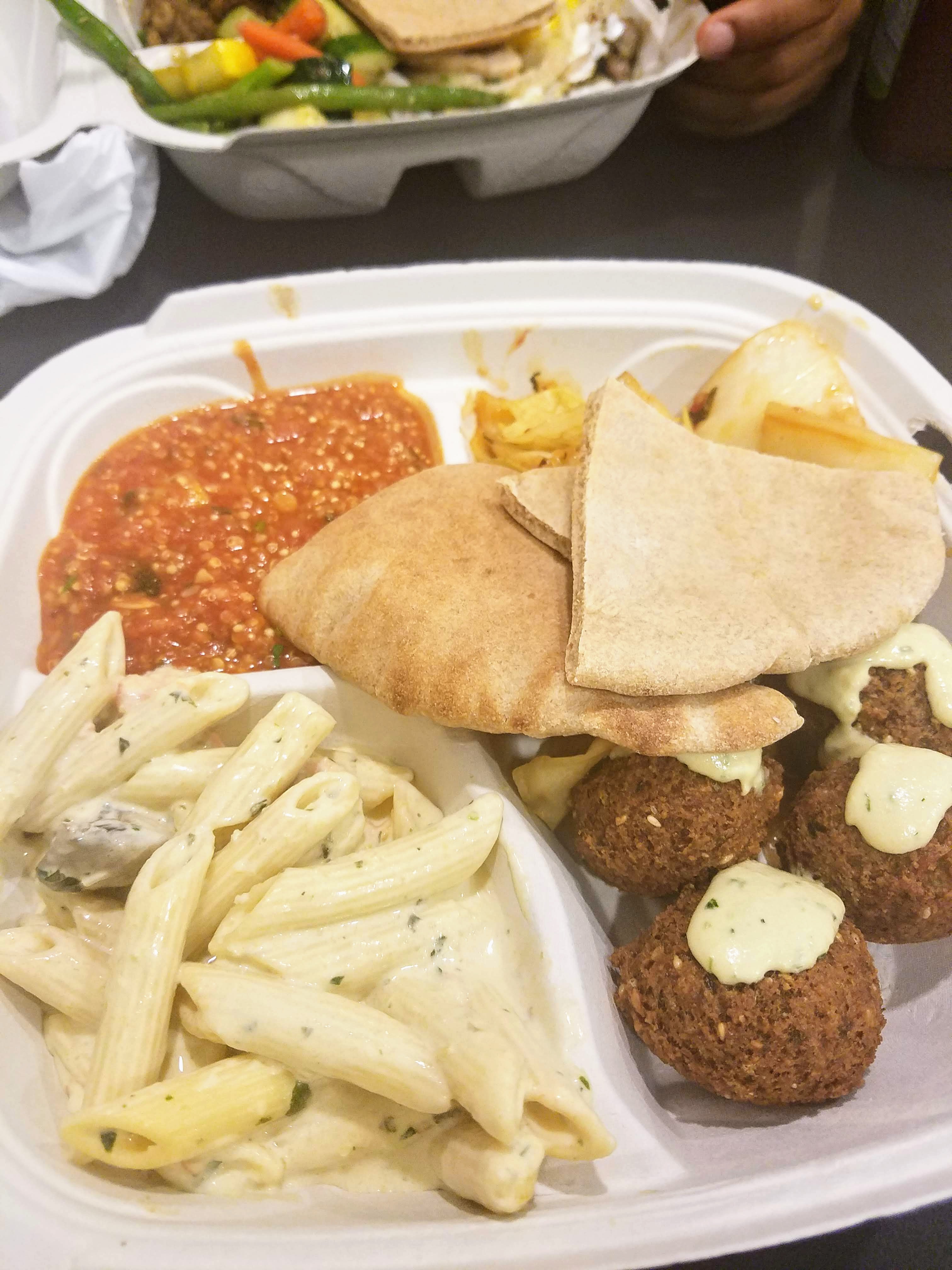 What seems like a month ago but was really just a couple weeks ago, I slipped out of town to Atlanta for a quick 48 hour relaxation getaway. So you know what that meant… partaking in one of my favorite activities – eating in a hotel room bed. There’s something about A.) eating in bed and B.) eating in a bed you don’t have to clean up or make.

When it comes to traveling and eating, I always have to research some good local eats. For this trip, my list included: Kwan’s Deli and Korean kitchen (because I have moved back to the land of limited Korean food), Mangos Caribbean, Aamar Indian, Hsu’s Chinese Food, Aviva Mediterranean and Juice Bar, The Food Shoppe, Caribou Coffee (yeah I happen to really like Caribou. It reminds me of when I spent a summer at Emory for the Youth Theological Initiative), and Anh’s Kitchen.

Now I did say I was on a QUICK FORTY-EIGHT HOUR trip. So how on earth would I be able to eat at all 8 of these establishments?! I guess a girl has to have options. Especially if they’re all delicious.

Because Aviva is NOT open on the weekends, it was on the top of my list for when I *finally* arrived in Atlanta. Poor visibility and runway construction delayed my flight an hour and Atlanta’s non-stop traffic meant it took twice as long as anticipated to get Downtown. In other words, as soon as I got out of my Lyft, I was ready to eat!

Aviva was mere steps away from the hotel, and as soon as we entered, I knew I had made the right choice. We were quickly greeted by the most effervescent man, who I assume was the owner (and in fact was Kameel, the chef behind Aviva). He greeted everyone with such kind and welcoming words, and due to the long line, was also passing out samples of a most delicious lentil soup.

Sadly, they were out of lamb shawarma but not out of lamb kafta (flavorful ground lamb patty). Since I have a deep love for falafel and since everything on the hot bar looked so enticing, I had to get a veggie plate – falafel, cabbage, vegetables with quinoa in a tomato sauce (yall know I love a red sauce), and penne pasta with mushrooms (am unexpected menu item at a mediterranean restaurant but why not?) plus a side of hummus.

I don’t know if it was the good energy from the employees that seeped into our meal, but everything was amazing! I had to double back for the baklava. They had walnut and pistachio. I had to get the pistachio! I’ve been on a pistachio binge for a while now. The cashier was just as friendly as the owner, convincing me that the food had to have some sort of special, magical, feel good ingredient. And, it goes without saying, the baklava did not disappoint.

A late lunch can only be matched with a late dinner. I had to have Anh’s Kitchen for its specialization in Vietnamese cuisine. After one failed delivery attempt and an unusually long wait, our pho arrived. It was indeed worth the wait. The aromatic shrimp pho and spicy beef noodle soup filled the room. I will say that the broth for the spicy beef soup was divine. As much as I tried I could not eat all of my pho (has anyone ever successfully eaten a whole bowl of pho? or is it just me whose pho seems to be never-ending?).

As luck would have it, the next day there was a Harry Potter movie marathon, so my relaxation weekend was set. I ordered delivery, watched Harry Potter, took an unbelievable number of naps, and then ordered more food. Easily one of the best weekends ever.

The other eats that made the cut were: The Food Shoppe (cajun/creole), Aamar Indian, and because I had a pizza craving – Davinci’s pizza. I had to have the Jersey Devil pizza -marinara, Italian sausage, garlic, grilled green peppers, grilled red onions, roasted red peppers, provolone – as I finished watching the Harry Potter movie marathon. The only thing I would add to the pizza is extra Italian sausage.

Early Sunday morning I made my way back to Memphis feeling refreshed. I thought a 48 trip might not give me all the rejuvenation I needed, but it indeed was the perfect getaway.

If you find yourself in Downtown Atlanta, I highly recommend every place that made it into my 48 hours: