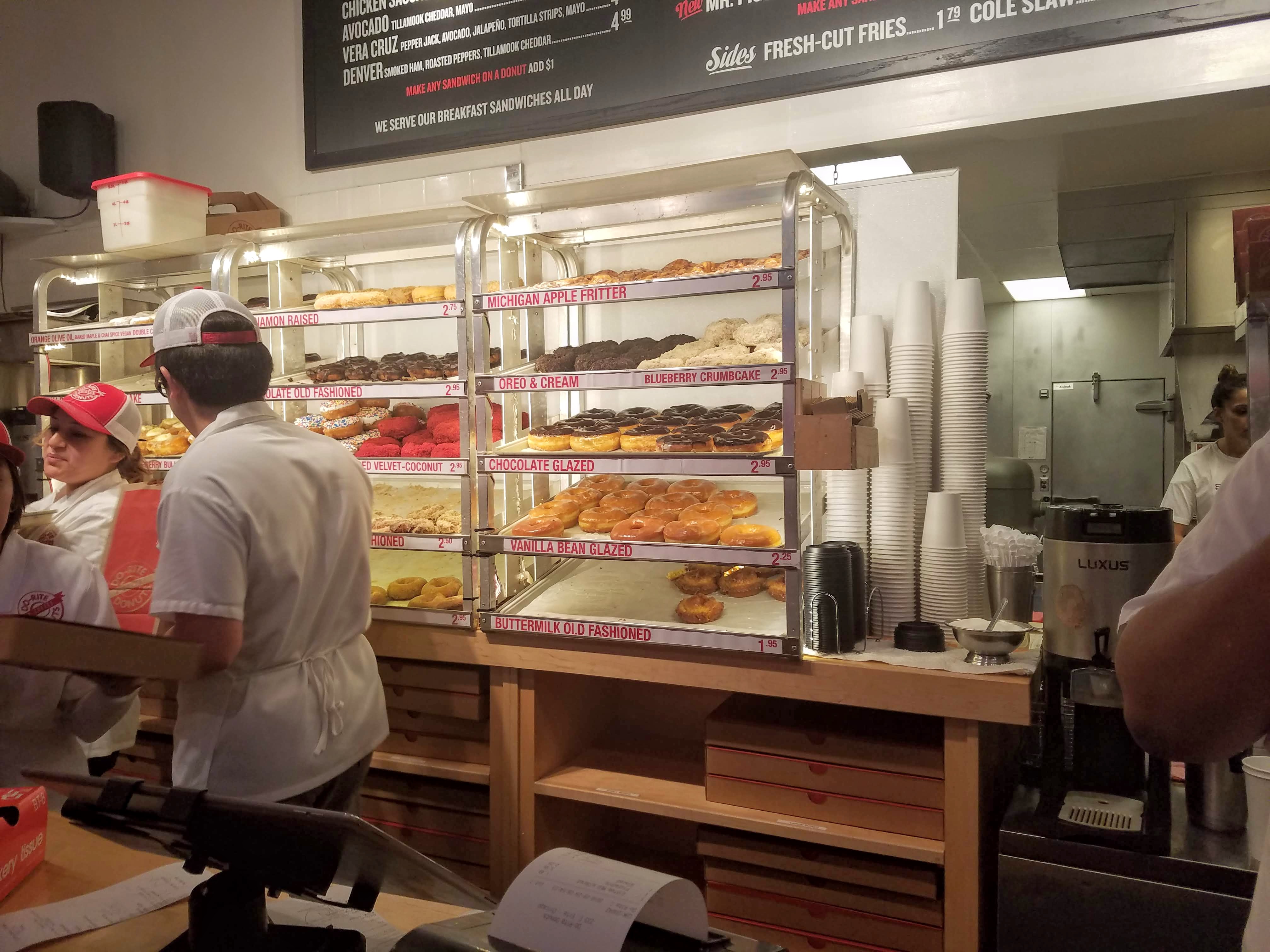 Last weekend I travelled to Chicago for KAtCH’s (Korean Adoptees of Chicago) 10 year anniversary and the IKAA (International Korean Adoptee Associations) Annual Convention. Over 175 Korean adoptees from across the U.S. and Europe gathered at the Hyatt Centric Chicago, Magnificent Mile to share their experiences as adoptees, explore topics central to our community, and celebrate KAtCH’s 10 years of service and community building. The convention itself was a three day event that included social activities and time for sight-seeing as well as a day of workshops.

It was on that Saturday, the full workshop day, that I had to swing by Do-Rite Donuts & Chicken. Luckily it was right next door to the Hyatt Centric hotel. A friend who lives in Chicago that I originally met during a semester abroad in Korea (and also my first time back to Korea) told me that Do-Rite was one of her absolute Chicago donut favorites. She also said the fried chicken was really yummy. With such a strong endorsement, I had to check it out for myself.

When I arrived at Do-Rite the line was not quite out the door (just at the door), and since I may have been running a bit behind I decided to forgo any of the breakfast sandwiches (I had really wanted the Avocado – toasted brioche bun, scrambled eggs, tillamook cheddar, avocado, mayo). Instead I kept it simple with a couple of donuts – Pistachio Lemon Meyer and a Glazed – and a coffee.

Yall. I had such a hard time narrowing it down to only two donuts. Truly I wanted half a dozen. For myself. Not to share. The Blueberry Crumb looked amazing as did the Chocolate Glazed Chocolate Old Fashioned and the Cinnamon Sugar. I just love a good Cinnamon Sugar donut. But I had to keep it together, so I somehow showed restraint and just got the two.

I made my way to the first session of the day and joined about 30 or so other adoptees as we discussed our experiences in the adoptee community. The session was over an hour long, and the Dark Matter coffee from Do-Rite was not going to sustain me. The donuts were calling my name. So in the middle of the session, yes, I was THAT PERSON rifling through a paper bag and wax paper to get to my Glazed donut. The person sitting next to me started to giggle. It was too late. I had to commit. After all the crinkling and shuffling of the paper, I had to retrieve the donut.

It was so delicious and exactly what I needed! I savored the donut while listening to my fellow adoptees share their involvement in the Korean adoptee community.

Later that day, I needed more coffee. You know how a day full of panel sessions is. Even if it’s something you’re excited about, something about hotel conference rooms requires more coffee. Although there was a Starbucks in the hotel, Do-Rite with its excellent coffee was right next door. So I returned “for coffee” and ended up with a gigantic Chocolate Glazed donut. Do-Rite’s donuts are sizable but the Chocolate Glazed seemed even larger than the morning’s first two.

When I returned to Do-Rite, the cashier reminded me that I had been there earlier. Donut shamed!!! But, food shaming is not a deterrent. I got my coffee and my donut, walked back to the hotel, and joined a session on Korean adoptees and name reclamation.

Dr. Jason D. Reynolds/Taewon Choi led attendees through a discussion of Korean adoptee naming and name reclamation experiences and presented his research findings on the topic. It is fairly common for Korean adoptees to reclaim their Korean birth names. This process of name reclamation is not taken lightly, as adoptees often report resistance from friends and family when reclaiming their birth names. However, for those adoptees who do reclaim their Korean names, they find it healing and more in line with their authentic selves. Name reclaiming represents a shift in identity and sense of self. Since I have been strongly considering reclaiming my Korean name, SunAh, I was especially looking forward to attending Dr. Choi’s session.

In all, my weekend in Chicago with the Korean adoptee community was a fantastic time of “KAtCHing” up with old friends, meeting new people, and learning more about the community. I also had the opportunity to share the news of our newly formed Tennessee Korean Adoptee group. I’m looking forward to the next Korean adoptee convention. Who knows, by then I may be reintroducing myself as SunAh.