We’re Going to Need More Wine: Stories That Are Funny, Complicated, and True 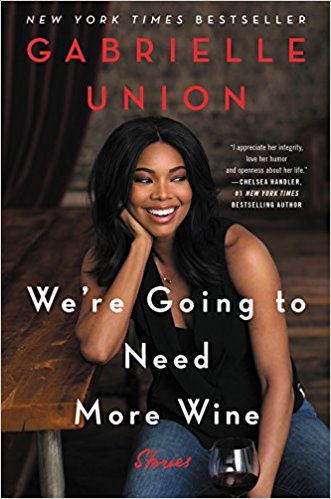 I’m wrapping up my summer reads and Gabrielle Union’s We’re Going to Need More Wine was one title I wanted to get in before the fall semester began. I decided it would be the perfect read for a recent Day In. Instead of wine though, I grabbed an oversized goblet of water, snuggled into the couch, and readied myself for some laughs.

But what I got was so much more.

In Chapter 1, “Ladies and Gentlemen, Ms. Pleasanton,” Union jumps right in to race and assimilation, and living the dual life of blackness in a white world calling upon DuBois’ concept of double consciousness. Union details growing up in a predominately white neighborhood and being one of a handful of Black students. Her attempts at fitting in with her white peers, however, left her unable to fit in with her cousins back home in Omaha. Later in the chapter she talks about going to a Greek party at her sister’s college and how that experience of being in a space filled with Black, educated, and fly co-eds opened up a new world of possibilities to her. I empathized with her desire to fit in to multiple worlds and then finally catching a glimpse of a world that would allow her to be her whole full self.

Throughout the chapters, Union shares insights into her life and areas where she struggled (and triumphed) in recognizing her strength, confidence, and worth (Chapter 12, “On Mean Women and Good Dogs,” was one particularly good one). Sprinkled throughout is advice to her younger self, words of wisdom she’s shared with her mentees, and directives to peers.

Just as in Chapter 1, each of the chapters that follow touches on a contemporary social issue often incorporating or referring to empirical research on the topics. I was pleasantly surprised to see one of my favorite sociologists, Margaret Hunter, mentioned in the book for her work on colorism. Union references Hunter’s findings on how colorism – preference for lighter skin – translates into tangible returns, specifically higher wages and marital partnerships with higher status men. Other research (not mentioned in the book) shows the effects of skin color on a wide-range of life chances, including income and educational achievement, home ownership, marriage, employment, and likelihood of arrest and sentencing length.

I don’t want to go into too much detail as to which social issues Union discusses but suffice it to say, her incorporation of her life experiences along with the issues makes the book even more timely, relevant, and easy to read. Even though there are some very personal and heavy topics discussed, there are also a lot of hilarious moments. As Union regales her reader with personal stories, I found myself uncontrollably laughing. The kind of laughter that bursts forth with no warning and without thought. We’re Going to Need More Wine really was laugh out loud funny.

While I expected Union’s essays would be entertaining I cried way more than you might imagine or than I thought I would. I think that was in part to how relatable her stories were and how it immediately seemed like I was connecting with a really good friend who, not only knows, but shares all your secrets. And as with talking with a good friend, hearing her share her vulnerabilities and recognizing the pain you both had been sharing, leads to tears – tears of pain, of release.

PAIR IT WITH your favorite bottle (or two!) of wine, what else?