The Buddha in the Attic 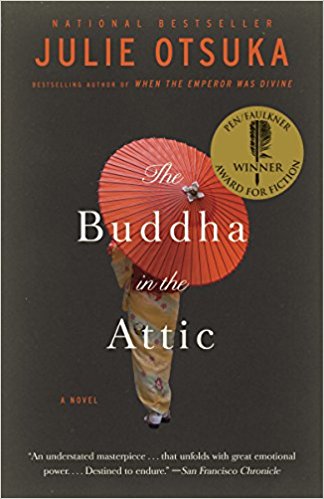 In The Buddha in the Attic, Julie Otsuka tells the, at times, hopeful and, at other times, heartbreaking stories of Japanese picture brides. Each of the eight chapters details defining elements of the journey of these Japanese women joining their husbands in America and the lives that follow. Rather than one protaganist, Otsuka begins by presenting fragments of multiple picture brides’ experiences. Through the multitude of voices, we get a robust vision of these Japanese women.

The book begins by tracing the women’s journey in the bowels of a ship from Japan to America as they leave their homes, families, and innocence. With pictures of their husbands and dreams in tow, the women hope for the best. Upon their arrival, many of those dreams are dashed as the husbands captured in the photos do not match the reality of the men before them. As they consummate their marriages, it becomes clear that, for many of the women, the dreams they had for their new lives in America will not be realized.

Each of the remaining chapters details an aspect of their home and family life – what type of work they do, where they live, pregnancy, child rearing, and Japanese imprisonment. The social and political climate shapes many aspects of the Japanese women’s lives in subtle and also glaring ways. There are attempts to go unnoticed and hopefully unharmed, with varied levels of success. And, when their Japanese neighbors begin to disappear, it is the silence of white neighbors, friends, and employers that is deafening.

With a lyricism that makes the highs ever more beautiful and the lows more harrowing, Otsuka draws her reader in to the beautiful, humanizing, and haunting lives of Japanese picture brides. These stories, though detailing a time in the U.S. past, parallel many of the social issues and cross-racial interactions and inactions of today. While the compactness of this book may seem like it lends itself to being a quick read, it deserves to be fully and slowly savored.

PAIR IT WITH a warmed Japanese plum wine.