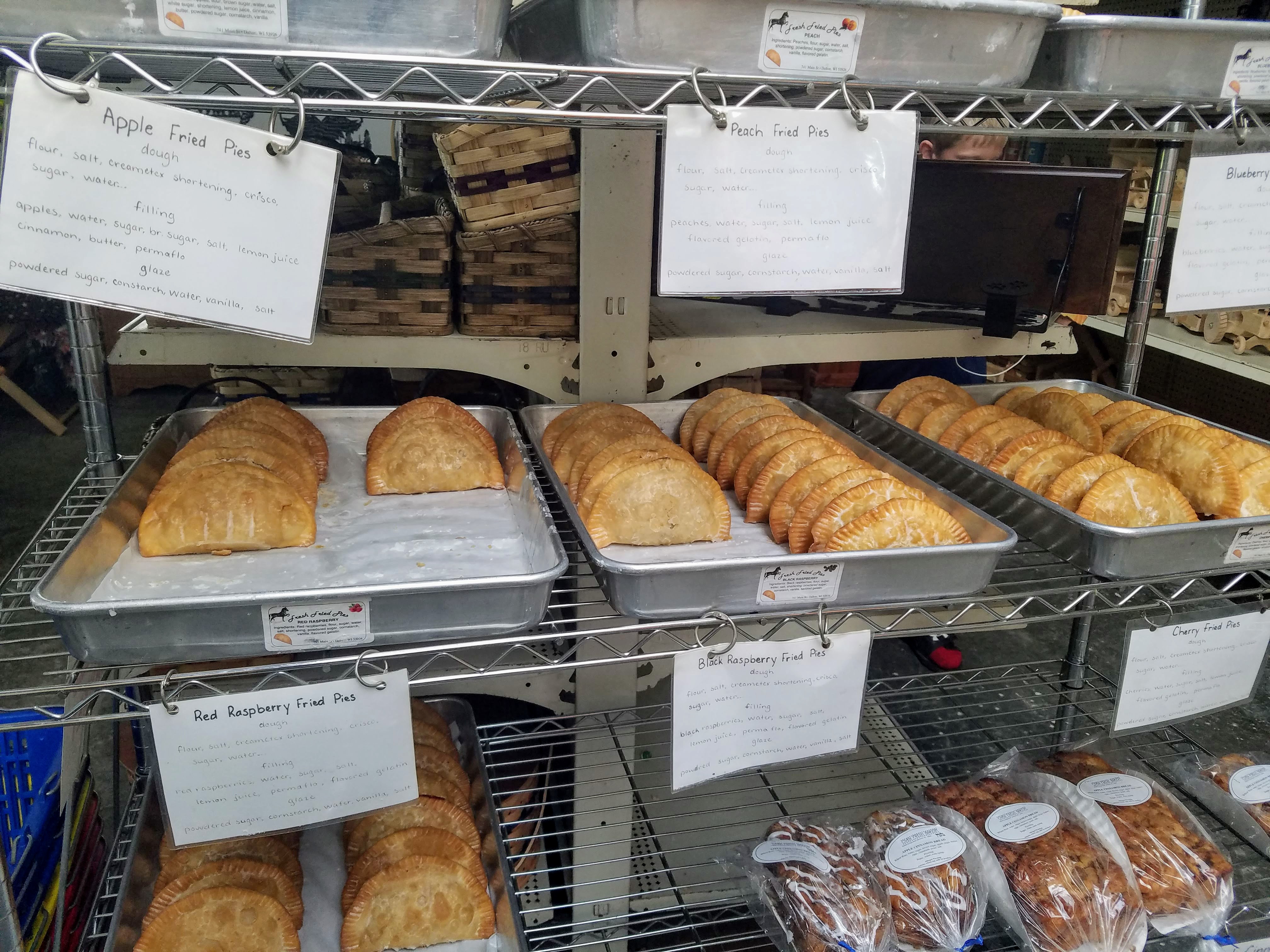 Last week I travelled to Wisconsin to be with family as we celebrated the life of my Grandma. At 96 years old she had lived quite a life, one that included serving as a Corporal in the U.S. Army Women’s Army Corps (WAC) during World War II, raising nine children on a working farm, and volunteering with the American Cancer Society, Hospice, and Headstart. As we laid her earthly body to rest, I was comforted by the peace she seemed to have felt as she joined loved ones in the next life.

While most of my time on this trip to Wisconsin was devoted to honoring my Grandma and settling her affairs, my father and I were able to spend some time together as well. On my last day there, we stopped by the Oven Fresh Bakery in Markesan. Open only on Fridays and Saturdays, this Amish bakery is filled with every freshly baked sweet treat you could want – donuts, fried pies, pies, cakes, cookies, and breads – as well as candies, soup mixes, and non-food handmade items, including furniture and toys.

As soon as we entered Oven Fresh Bakery we were greeted by shelves of fried pies – red raspberry, blackberry, peach, apple, strawberry, and cherry, to name a few. Truly, I wanted one of each, but I narrowed it down to two: peach and strawberry. There were some pretty tempting cinnamon rolls and rhubarb pies (I LOVE rhubarb!), but since I could not eat a whole pie by myself I did not dare pick one up. As we made our sweets decisions, I wondered if we should pick something up for Grandma before quickly realizing she was gone.

We made our way to the front counter where freshly made donuts glistened like rare jewels. Glazed, sugar, and chocolate-covered chocolate sat beside lemon and cream-filled bismarcks. I got one sugar and one chocolate-covered chocolate. After paying for our treats, my dad and I sat outside on the front porch in some comfy rocking chairs and enjoyed the cool air along with our donuts and coffee. Another family sat at a picnic table on the porch and admired the handmade wind chimes.

The sugar donut was simply amazing! And, it was still warm, which meant it nearly melted in mouth. I decided I had to have one of the glazed donuts (I was saving the chocolate-covered chocolate one for later) and went back inside to purchase another. The glazed was good but no where near as delicious as the sugared donut. If you haven’t noticed, donuts are my weakness.

After finishing our treats – my dad had a fried pie – we continued down the country road to the Wayside restaurant, a diner inside the gas station. My Grandma loved their sausage gravy and biscuits and the 95 cent coffee, and my dad says their broasted chicken is some of the best fried chicken he’s ever had. Broasting chicken is frying by pressure fryer (instead of simply deep frying) and was created by L.A.M. Phelan of the Broaster Company in Beloit, Wisconsin. I had neither sausage gravy and biscuits (though my dad did) nor broasted chicken, but instead had a veggie omelet and potato pancake. After all of the yummy food, it was time for a nap!