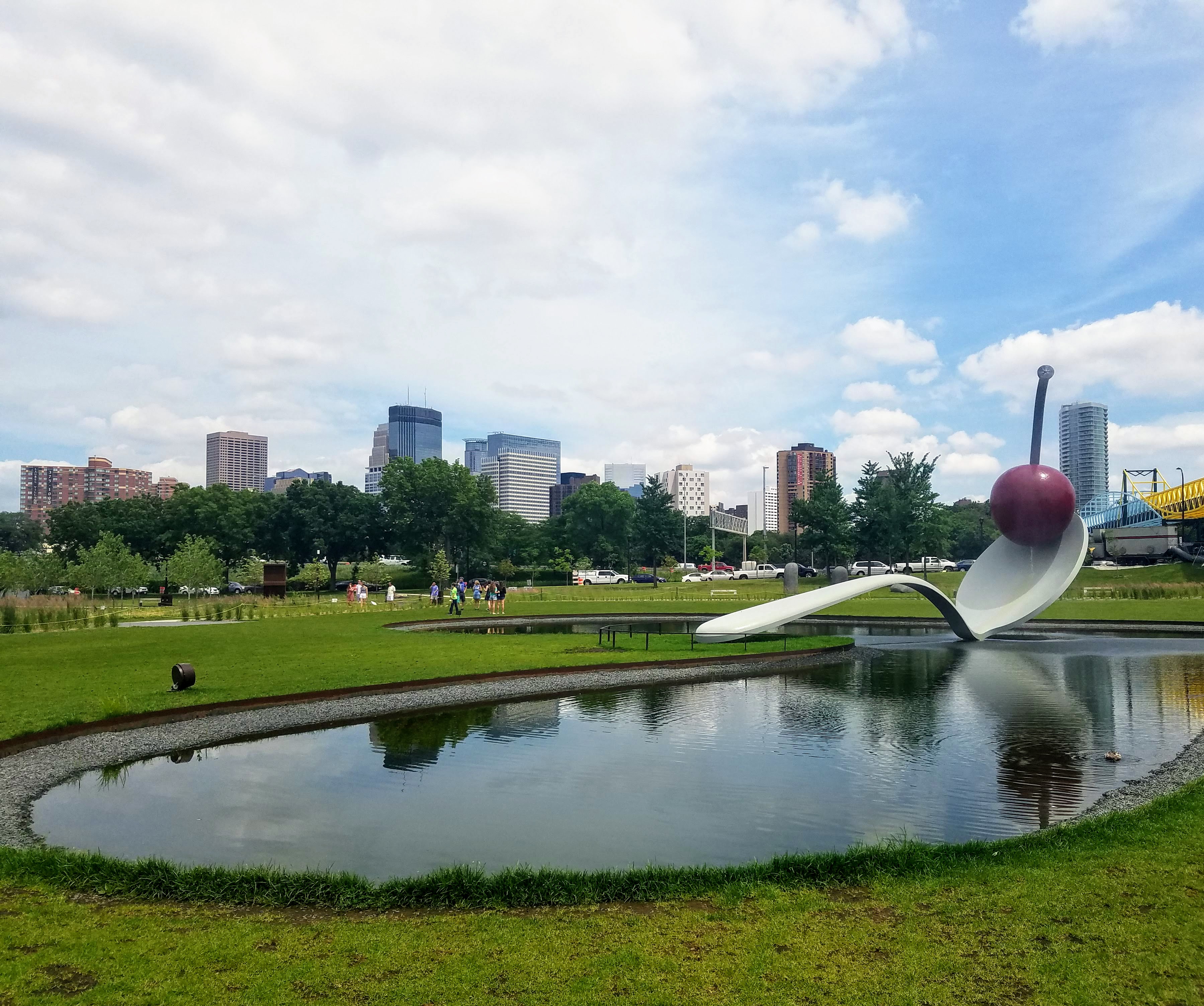 It seems like yesterday but a few weeks ago I was in Minneapolis for the Korean American Adoptee Adoptive Family Network (KAAN) conference. This was my fourth consecutive KAAN and my first time presenting. Adding to the excitement was the fact that it was in Minneapolis, where one of my best friends lives. Since KAAN is pretty all encompassing, I traveled to Minneapolis a couple days early to hang with the bestie and explore the city.

The last time I flew I almost missed my flight, so this time I made sure to get to the airport in plenty of time. This also ensured that I could engage in my Jamba Juice pre-flight ritual. I always get an Orange C Booster to protect me from all the airport germs. This time however I decided to mix it up and got some pomegranate monstrosity that was yucky and quickly found a home in the nearest trash can. This meant that I was super hungry once I touched down in Minneapolis. Luckily, the bestie had already scouted out a brunch spot.

We made our way to Eggy’s, which I realized I had been to in Chicago. I ordered the largest omelet ever with a strawberry and lemon mascarpone pancake and coffee. After what seemed like forever, and it really was an obscenely long time because, as I would later overhear, there was only ONE person in the kitchen, our food arrived. But sadly my pancake was M.I.A. Our server suggested I get the cinnamon roll pancake and by this point who was I to disagree. She was right though, it was quite yummy.

We set off to The U (University of Minnesota) for a campus tour that included the sociology building (the home of all of our hopes, dreams, and depression) and the campus art gallery, which had a fascinating exhibit entitled “Fight or Buy Bonds” featuring WWI propaganda posters.

Later that day we went to the rooftop of Union Bar & Grill, where we ordered everything our hearts desired – buffalo cauliflower, seafood flatbread, mussels, lobster mac & cheese, and hashbrowns with pork belly and a fried egg (listed in order of deliciousness) – and enjoyed the views.

The next day began with breakfast at The Bad Waitress, where you write down your own order. Clearly, I would not have made a good waitress but my food did still manage to find my table. The eggs were way past medium but the veggies were flavorful and the guacamole was perfect.

Afterwards we went across the street to Glam Doll Donuts, a kitschy donut shop that I was very excited about trying. The blueberry shortcake donut was absolutely amazing. The yeast donuts were not so good. They tasted like they were a day old, a little too dense. While we’re at the critiques – there was a leak in the ceiling, a kitchen towel on the floor inadequately soaking up the falling water, several flies buzzing about, one of which died in my pour over (up until that point the coffee was very tasty though), and overall the furnishings seemed a bit dirty and unkempt.

Of course, no visit to Minneapolis is complete without seeing the cherry spoon at the Walker Outdoor Sculpture Garden after which we strolled around one of the area’s many lakes.

Then it was time for me to join my KAD fam at KAAN. Since 1998 KAAN, the organization, has hosted an annual conference (also often referred to colloquially as KAAN). Through the conference Korean adoptees, their (adoptive) parents, and now their spouses and own children have a space to connect with one another, explore topics relevant to their adoption experience, and find support as well as other resources. Over the years, it seems that, KAAN has shifted from being primarily adoptive parent-led to being more collaboratively adoptee and adoptive parent-organized. Since this was only my fourth KAAN, I cannot speak to the history and politics of the organization historically, but I can say that as an adoptee I have found KAAN to be generally welcoming and affirming.

This year’s KAAN was particularly special for several reasons (some to me personally and others more broadly): 2018 marked KAAN’s 20th anniversary; the search for a new executive director began; it was held in Minneapolis, the Korean adoptee capital of the U.S.; there were two workshops on Asian American makeup (it may seem trivial but makeup for Asian Americans has been such a struggle and even more amplified for those of us adopted to white families); and I was presenting two workshops with fellow transnational transracial adoptee Shaaren Pine entitled “What did you say?: Responding to Interpersonal Racism.”

KAAN has a summer camp feel. You get to see friends that you may not have seen any other time of year; you get to make new connections; and it’s a weekend that takes you out of your regular routine. This last piece is so important. For a lot of Korean adoptees, and transnational transracial adoptees more broadly, there may not be anyone else like you, like your family formation, in your neighborhood, school, place of worship, or job. So you never really have an opportunity to discuss your experiences, questions, or challenges at least not with someone who could relate. KAAN provides that space.

The first year I attended KAAN it was held in St. Louis and it was around the time that #BlackLivesMatter was forming. I did not know what to expect out of the weekend, but I was pleasantly surprised that one of the main plenaries was on #BlackLivesMatter and its importance to adoptive families. I am continually encouraged by KAAN’s commitment to acknowledging contemporary social inequalities and the role of racism. In line with that focus and this year’s theme of “Caring for Our Community: Mental Health, Self Care, and Advocacy,” Shaaren Pine and I organized a workshop on responding to interpersonal racism which included strategies for responding versus reacting and self care during and after such experiences.

The idea for our panel came after attending a session last year where an adoptive parent completely dismissed her adult child’s experiences of racism when she was growing up. The reality is that even as we, as people of color, as non-white, as immigrants, experience interpersonal racism (popularly referred to as microaggressions) from community members and strangers, one additional arena where we have these experiences is within our family. This adds to the difficulty in responding. With this in mind, we offered two sessions of our workshop, one for adoptees only and one open to adoptive parents as well as adoptees. Whereas the adoptee only session was full of laughter and shared understanding and had an almost cathartic feel, the open session was virtually silent. The difficulty in discussing race and racism with adoptive parents was palpable. Even for us as presenters, we were nervous as hell. To start both sessions, we shared personal experiences of interpersonal racism from our family, and the vulnerability to share those experiences took different meaning depending on the audience – with adoptees there was an assumption of shared understanding and support whereas in front of adoptive parents there was an anxiety of having our experiences denied. In the end, both workshops seemed to have gone well and attendees appreciated the strategies we shared as well as the hands on nature of the workshop. And, just like last year, Shaaren and I were inspired by something that was said in our session and already have a topic for our proposal for next year’s conference. Stay tuned.

It was finally time to say goodbye to Minneapolis but not before doing the most touristy things of all – visit the Mall of America. But first, brunch.

For my last meal in Minneapolis, I had a scrumptious frittata at The Lowry. After being properly nourished, the bestie and I trekked to the Mall. Then it was time to head to the airport.

I closed my trip the same way it began – reading Patricia Hill Collin’s Another Kind of Public Education: Race, Schools, the Media, and Democratic Possibilities in preparation for the fall class I’m teaching. One of my Southwest seat mates even asked to take a pic of the book so she could check it out later. I’m already looking forward to next year’s KAAN, which will bring us all back for another weekend in the Twin Cities.