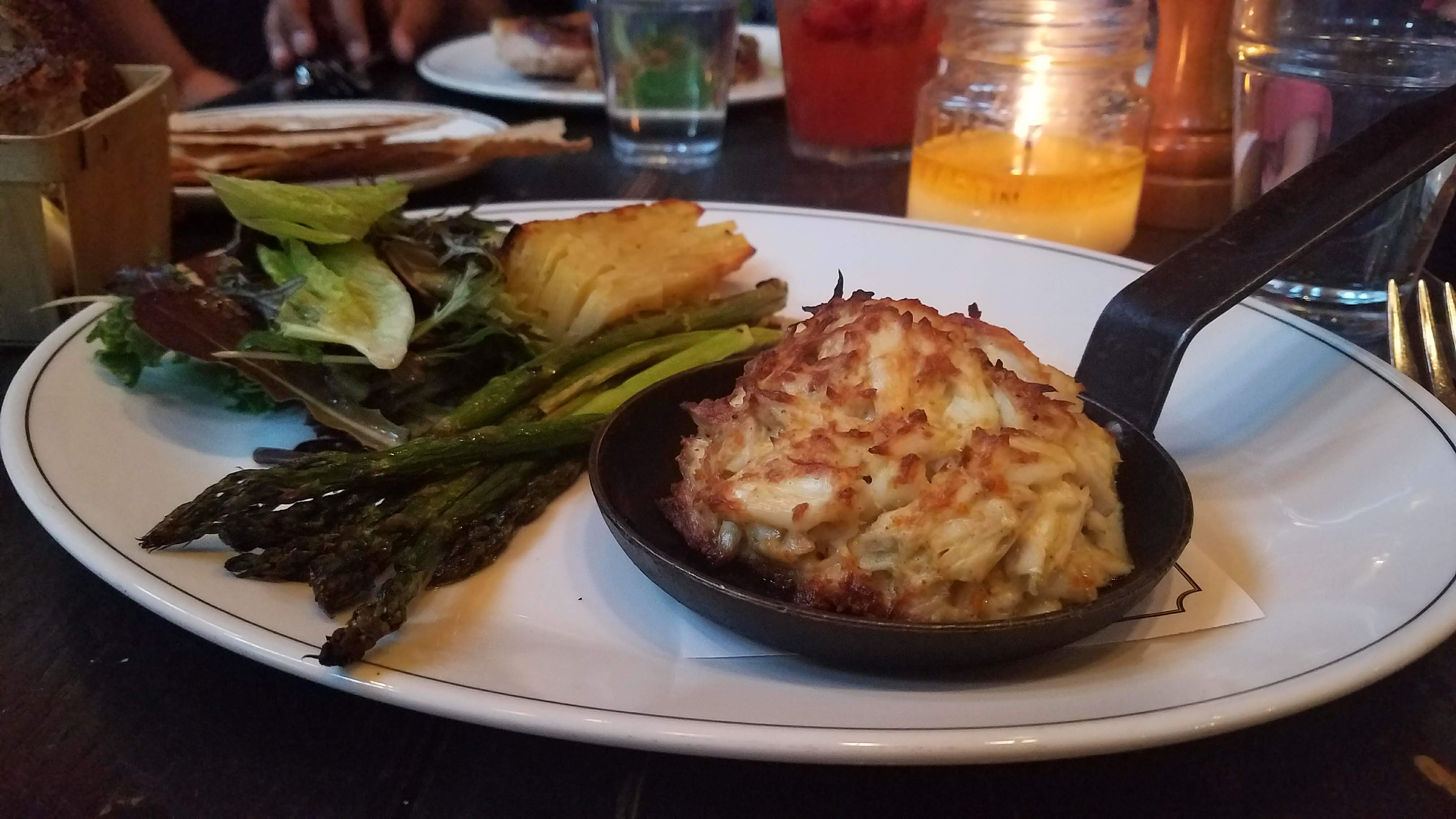 The last time we were at Woodberry Kitchen this happened…

It was a terribly rainy day but the promise of brunch at Woodberry Kitchen lured us out of the house. In the background, you see a fried pork belly Eggs Benedict, fresh garden salad, and stone grits. In the foreground, some sort of skillet eggs hot out of the brick oven. Look I don’t remember exactly what I ordered because sadly, the last time we were at Woodberry Kitchen was almost TWO YEARS AGO!! *insert sobs of despair*

I do, however, remember this absolutely delicious donut.

Mainly because I do love a good donut, and this was very tasty.

So what would draw us to Woodberry Kitchen after such an extended departure (besides finally realizing all the food we missed out on)?

Surviving our families being in town. That’s what.

Graduating with my PhD brought several loved ones in town, including both of our parents…for a whole week. They were meeting for the first time, kinda like a real life “Guess Who’s Coming to Dinner” remake, and we were unnecessarily? necessarily? nervous. But like many of our worries, the reality was not nearly as bad as we imagined, and as the week came to a close, we had indeed made it with our sanity basically intact.

To celebrate making it through all the celebrations, we enjoyed a relaxing dinner. As you might imagine, the dining rooms at Woodberry Kitchen were filled with other recent graduates. As it was a relatively nice night, there were even folks dining al fresco. It was not that nice of a night, so we joined the rest of the celebratory graduates inside.

It was a hard choice between the cheese board and the spicy cheese but we opted for the latter. We were not disappointed. In fact, the spicy cheese was probably the highlight of the meal (though Woodberry Kitchen’s homemade sourdough bread was a close second). Yes, the cheese was that good. Pimento cheese topped with a “city ham jam” served with spelt crackers. It was the perfect appetizer.

Strawberries are in season, and both of our drinks took advantage of this. Mine a Gin Lane – strawberries, chamomile honey, ginever, and finocchietto. His a Roll with the Punches (apropos for the week we just had) – strawberries, honey, verjus, white rum, and allspice dram.

Entrées were a beautiful, hearty pork chop and a crab cake out of the oven accompanied by a spring salad (the dressing was absolutely amazing), potato pave, and asparagus (that would have benefitted from being blanched. Sadly, it was a touch gritty.). It has been forever since I’ve had a pork chop, so you know I had to have a small taste. A full pork flavor delighted my tastebuds while the medium cook ensured that all the juiciness was retained.

Since I lost paper-rock-scissors and had to drive home, for dessert I had a coffee and the rhubarb tart with rhubarb sorbet. The tart was not as delicious as I had hoped for (I do love rhubarb) but the sorbet was divine – light, airy, and appropriately tart from the rhubarb juice. The C.M.P. – chocolate, marshmallow, and crushed peanuts – sundae wasn’t bad because who doesn’t love toasted marshmallows. But, in the end, I think I should have followed my first heart and gone with the strawberry shortcake.

In all, it was a much deserved dinner – not only because we survived both our parents being in town but also because of this great accomplishment. One PhD down, one more to go.