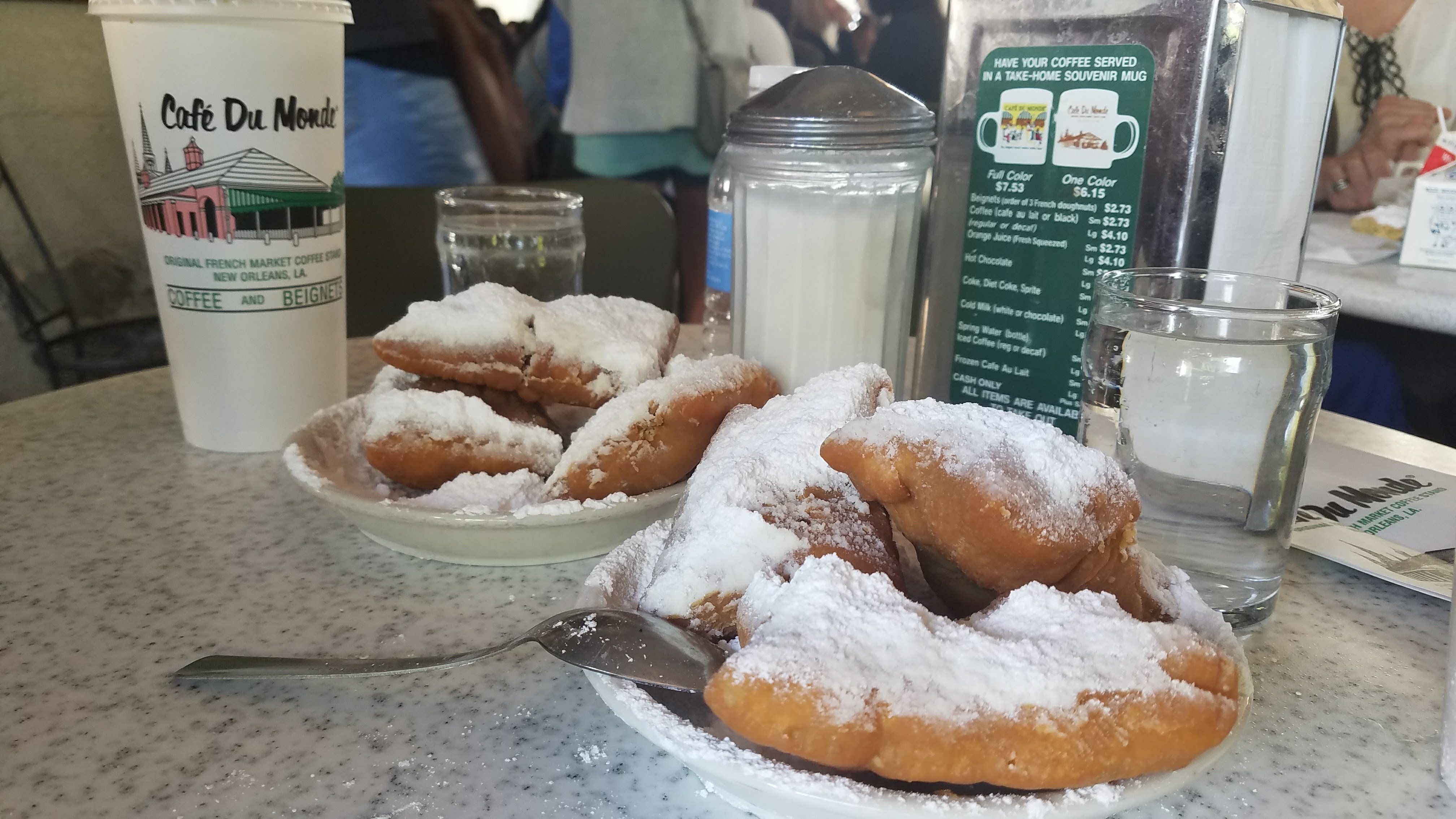 Last week I was in New Orleans celebrating my successful dissertation defense and a new job (Assistant Professor, Department of Sociology, University of Memphis) and eating yummy food, all under the ruse of attending the Southern Sociological Society’s annual meeting. In fairness, I did present some of my new work investigating Korean adoptee advocacy around adoptee deportations.

After coming thisclose to missing our flight – everyone was boarded, they were about to close the jet bridge, we got a lecture from the gate agent about getting to the airport earlier – both we and our luggage (Praise God!) made it to New Orleans. We arrived at lunch time, which meant, we needed some lunch. Our Lyft driver suggested Lil Dizzy’s Cafe and after a quick Google search, it seemed like the right place to go to satisfy our food cravings. Now you know it’s good when there is no picture evidence. Sorry y’all but I was too busy enjoying the lunch spread – fried chicken, smothered pork chops, dirty rice, gumbo, veggies. (Y’all know I didn’t eat no chicken but my boyfriend said it was the best fried chicken he’s ever had, period.) But the star, the absolute star, of this meal was the butter beans. Lawd!!! I ain’t had beans likes this in FOREVER. I truly could have eaten the whole pan of beans and died happy.

When we asked for the check, our waitress said not til y’all get some bread pudding. Who were we to disagree.

That lunch required a walk through New Orleans and a nap. We woke up in time to get in line at Mother’s because we’re tourists and why not. About an hour later our table was filled with fried catfish, oyster and shrimp po’boy, red beans and rice, potato salad, and seafood gumbo. Now as a native Memphian and therefore a catfish connoisseur, the catfish was okay. That means it was good but it wasn’t great.

The next morning we had some time before the first session we wanted to attend so we walked down to the Quarter to Café Du Monde. No line, no wait. A miracle. Two orders of beignets, cafe au lait, and an iced coffee graced our table. I could not have been happier. Our waitress gave us a little to go bag as if we weren’t going to immediately devour all of this deliciousness.

After a fabulous panel on “Critical Race Theory and Empirical Social Science in the Era of ‘Fake News,'” it was time for lunch or brunch. We made our way to Café Conti, where breakfast is served late into the afternoon. The crab and brie crepe with garlic bechamel was exactly what I needed. And, the bacon, scallion, brie, and apricot crepe was also a perfect lunch choice.

Later that night a group of folks went to Bullets Sports Bar for some live music. This is where I had some stellar catfish and some equally delicious red beans and rice.

Two days in New Orleans had already passed and I still hadn’t made it to District Donuts, Sliders, and Brew. So, the next day I grabbed a Lyft to District Donuts on Magazine Street. A short line and a brief wait later, I had narrowed my choices to the Lemon Blueberry donut and coffee. For the full run down see my post on District Donuts.

After my donut run, I checked out a panel on “Building and Sustaining a Critical Race Theory Program in the South.” Afterwards, I grabbed my boyfriend, and we headed to Bevi Seafood for some crawfish. Once again we were faced with a plethora of delicious options. We ended up ordering a few pounds of crawfish, fried green tomatoes, cole slaw, and, of course, more potato salad. (In a former life I was becoming a potato salad connoisseur.) We got to Bevi right on time because 1. there was no line (but one quickly formed after we placed our order); 2. we found a table inside; and 3. a light rain started soon after our sides arrived.

The crawfish was super yummy and the fried green tomatoes were a definite must. Our Lyft driver on the way back to the hotel recommended that we try Neyow’s. So, for dinner we headed there. Another no line, no wait situation had us feeling super blessed by the food gods. After smelling pure deliciousness wafting from the grill, we had to order some chargrilled oysters. We were not disappointed. Honestly we should have ordered more because even though the shrimp creole and redfish were tasty, those oysters were over the top good.

Sadly, our time in New Orleans was coming to an end. Our flight was shortly after my panel presentation, where I presented “This is a family bill not an immigration bill: Racialized Scripts in Adoptee Deportations and Adoptee Citizenship Act Advocacy,” which meant we had to find something yummy nearby. We decided on 2 Chicks Cafe. The wait in line was not terrible but the wait for our food was ridiculous. About 25 minutes for pancakes, scrambled eggs and sausage, and a Vietnamese shrimp po’boy. Was it worth the wait? The food was very good, but would I knowingly wait that long again? No. On the up side, the pancakes were some of the fluffiest pancakes I’ve ever had, and while the po’boy would have benefitted from jumbo shrimp the flavors were definitely there. In all, not a bad meal to send us on our way back to Maryland.

Luckily, we made it to the airport with plenty of time to sit and wait for our flight to begin boarding. A couple hours later we arrived in Baltimore and were greeted by 40 degree temps – a sad and cold departure from the sunny 70s of New Orleans. I’m already looking forward to our next trip back to the Big Easy!