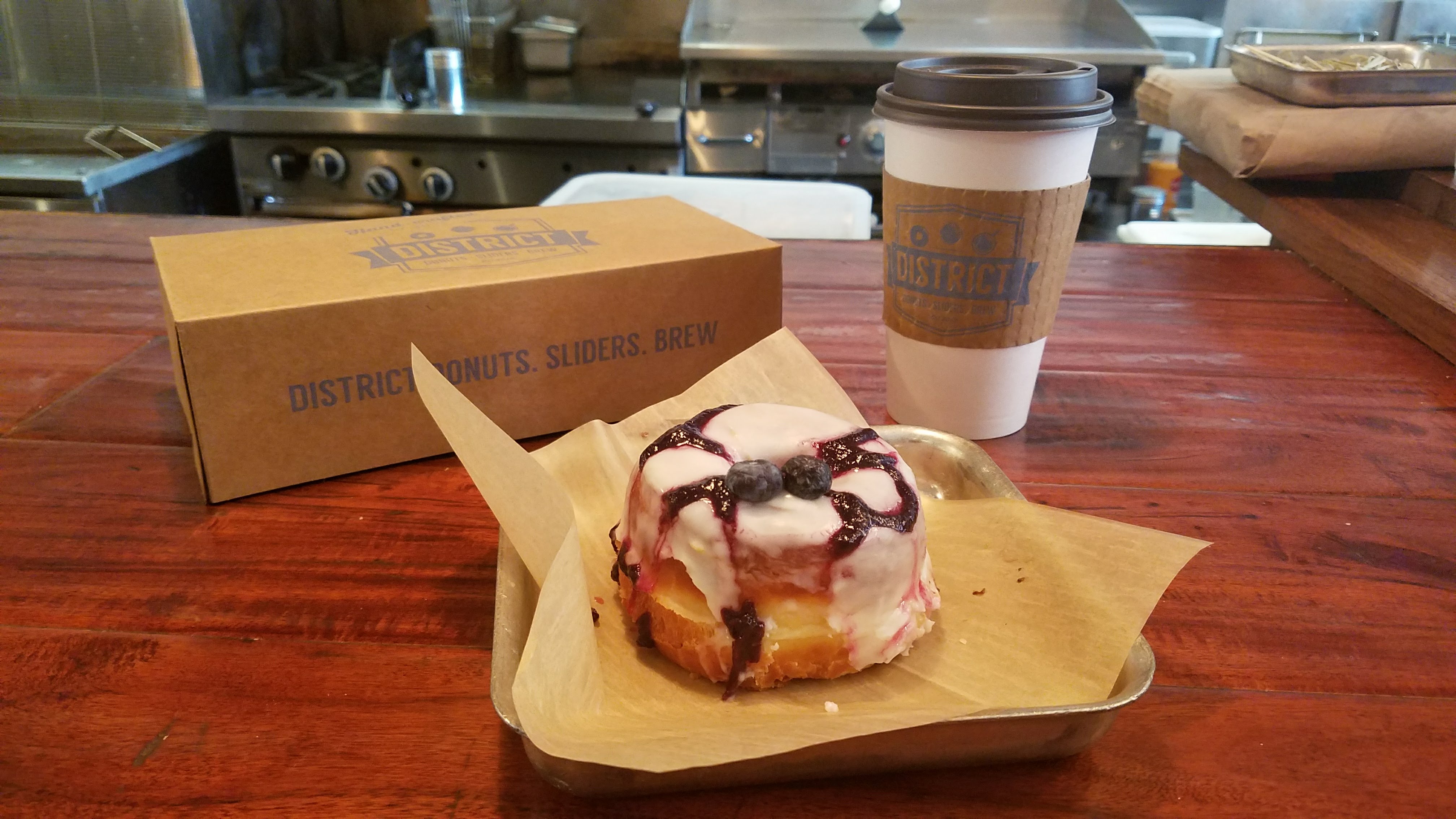 Before heading to New Orleans for the Southern Sociological Society’s annual meeting, I was browsing social media and happened upon District Donuts Sliders and Brew. As an avid donut lover, I knew I had to add District Donuts to my must-have-food-list.

Even at 8 in the morning there was a short line of folks waiting to have their donut dreams fulfilled. This gave me time to narrow my choices but also to think rationally about how much food I could eat, because not only did I want a donut but I also wanted a biscuit and a biscuit sandwich. Likewise, I wanted hot coffee (because that’s the best partner to a donut), Vietnamese iced coffee (because who doesn’t love Vietnamese iced coffee), and a fresh squeezed juice. Since my boyfriend was still asleep at the hotel, I wanted to bring him back a breakfast sandwich – the miso praline bacon & sunny side up egg on a biscuit sounded like it had to be ordered. But, it also sounded like something that needed to be eaten sooner rather than later. *sigh* Decisions.

By the time I made it to the counter, I had decided on a Lemon Blueberry donut, a large hot coffee with room for cream, and two Brown Butter Drops to go. I grabbed my donuts and a seat at the counter where I had the perfect view of donuts (and biscuit sandwiches) in the making. One guy was precisely measuring donut dough with an ice cream scooper and digital kitchen scale, another guy was dropping the pre-portioned dough into a deep fryer, and a woman was womanning the griddle, frying and scrambling eggs for customers’ biscuit sandwiches. *regret*

While I have been disappointed or at least underwhelmed by many a fancy, decorative, or well-hyped donut, leaving me with severe longing for Gibson’s Donuts back home in Memphis, District Donuts was no let down.

First, District Donuts are beautiful. Eye-catching colors, toppings, and titles. The day that I visited some of the specialty options were the Bellini, Raspberry Cheesecake, Candy Bar, and Red Velvet.

Second, they’re huge! by both height and circumference without compromising any texture or flavor. Even though I have deep disdain for folks who use forks and knives for certain foods – ex. cupcakes – I found that for these donuts a knife was necessary. I channeled my inner Christina Tosi/Gordon Ramsay à la Master Chef and cut into my Lemon Blueberry.

Third, they are delicious. The combination of flavors is what really sets these donuts apart. For example, I had the Lemon Blueberry donut. The tartness of the lemon was cut by the sweetness of the blueberry and the donut itself. I had to talk myself down from having another (especially since I had two Brown Butter Drops that I was taking to go).

In all, District Donuts was a complete win. My only regret was that I did not have enough time to visit them multiple days. My Lyft driver was super jealous that I was going to District Donuts and waxed poetic about their donuts and sliders. And, he was right, the donuts were simply amazing. The sliders I’ll have to try next time I’m in New Orleans.