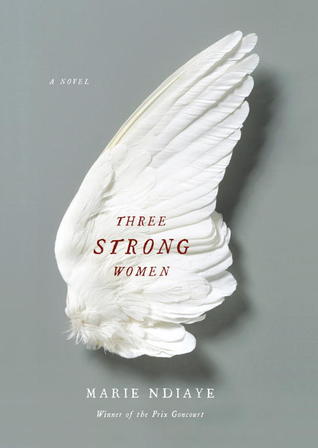 Intrigued by the title and the stories of strength and resilience it surely contained, I picked up Marie NDiaye’s Three Strong Women. Winner of the prestigious Prix Goncourt, a French literary award, Three Strong Women has been praised for its beautiful prose. With strength and beauty a backdrop for my selection, I knew I was in for a treat.

As I began my journey into the lives of these three strong women, NDiaye’s words enveloped me. Verbose and often unwieldy, her prose ushered me into the inner lives of each character. There is Norah, a lawyer and mother, who takes leave from France to return to her father’s home in Senegal. The reunion is not a welcomed one, yet Norah feels compelled to acquiesce to her father’s request for help. Norah is surprised by her father’s sparse living quarters – devoid of the endless company and opulence that once filled the house – which  stand in stark contrast to his younger years.

Then there is Fanta, a Senegalese woman, who meets her white boyfriend while teaching in Dakar. Haunted by his own demons, Rudy, also a teacher, loses his job and convinces Fanta to return to France with him even though he knows she will not be able to resume her teaching there. With their child in tow, Rudy wrestles with coming to terms with who he is – his father’s son, a man he never wanted to be. Yet, here Rudy is paranoid that the woman he loves will leave him, using their child as a bargaining chip, and allowing his inadequacies such free range that they silence his family. In fact, we hear almost nothing of Fanta’s own voice in this chapter.

In the third and final story, we learn the obsessions and passions that shaped Khady’s journey. A young childless widow, Khady’s respite at her in-laws’ house has ended. Khady’s obsessive desire to have a child blinded her to her husband’s own well-being, and while a child would have surely endeared her to her in-laws, her childlessness marked her as disposable. Joining countless others, she begins the trek to Europe. The trip proves costly but Khady retains a piece of herself, which enables her to continue fighting for an uncertain freedom.

NDiaye’s is a beautiful story, heart wrenching in its precision and depth. It is a story of survival, of women determined to make it to another day. It is the story of immigrants and what happens as they try to make lives in new places, whether by force, choice, or deception. And, it is also a story about three sad men; men who think too highly of themselves, who are too full of themselves to bother with the thoughts of others or the pains they inflict.

PAIR IT WITH something unique to each of the three stories: mint tea for Norah; a café for Fanta; and an orange soda for Khady, one of her last tastes of sweetness.