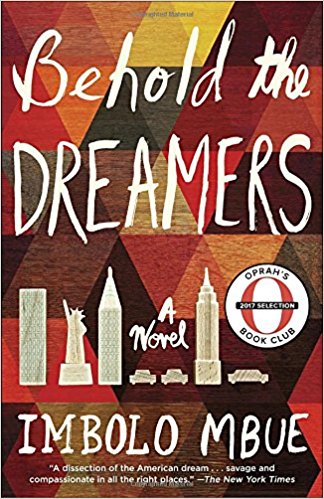 “And what do you think of this new person you’re becoming?”

“Let me put this another way: Are you happy with who you’re becoming?”

Imbolo Mbue tells a compelling tale of family, dreams, and sacrifice in her debut novel Behold the Dreamers. Set in New York City during the 2007-2008 financial crisis, Behold the Dreamers follows the lives of Jende Jonga, Cameroonian immigrant and private chauffeur, and Clark Edwards, Lehman Brothers executive and Jende’s employer. Each man and his family are striving towards their American Dream but like any dream, they soon learn that this one is fleeting.

After years of planning and saving, Jende has finally brought his wife, Neni, and six-year-old son, Liomi, from Limbe, their home village in Cameroon, to New York City. Although their squalid rent-controlled and roach-infested apartment may not be much, it is but a short stopping point along their dreams of becoming American citizens. Neni is enrolled at a community college, after which she plans to attend a 4-year university and then continue on to become a pharmacist. Neni and Jende soon expect another child, a baby girl, whom they nickname Timba.

Constant dedication to his job at Lehman Brothers may have taken Clark away from his two boys – Vince, now in his early 20s, and Mighty, nine-years-old – and wife, Cindy, but it has provided them with every (material) thing they could imagine. A luxurious high-rise condo in the city, a summer home in the Hamptons, private school and private lessons for Mighty, college for Vince, and the high society lifestyle Cindy never dared to dream of.

As each family member makes difficult choices, choices they nonetheless feel will work out for the best not only for them but also their family, they find their former selves chipping away. Will their decisions bring to fruition the dreams they so closely hold? Who will they become in the process? Will they lose what matters most?

I had to tear myself away from the pages but when I was reading Behold the Dreamers, the story played before me as if I were watching a movie. Imbolo’s storytelling is superb. I felt the frustrations of each of the family members, the hopes for a better future, and the women protagonists’ despair.

As the story was coming to a close, I wanted a different ending for Neni. I wanted something other than her returning to Limbe, relinquishing her dreams of being a pharamcist. I wanted more for her than being an obedient wife and mother. But everything has a price – to stay with her family she sacrificed pharmacy school; to have continued her pharmacy dreams she would have had to be separated from her husband and children. Jende had already sacrificed his health to maintain hope in an uncertain future.

In the end, Cindy’s most cherished hope was fulfilled: her family was joined together, but it cost her her life. She never got to see Clark show up in Mighty’s life or for Vince to have a better relationship with his dad.

Through these two families, Imbolo illustrates the price of dreaming and the hard choices in deciding which dreams are worth following and which must be surrendered.

PAIR IT WITH puff-puff, the Cameroonian treat that Neni makes for Mighty, (similar to a beignet but not necessarily so sweet. Here’s a puff-puff recipe with video! to try.). Or, you could also have a Diet Coke on hand. It’s the one indulgence that Jende allowed himself that helped lift his mood in the face of distressing news.