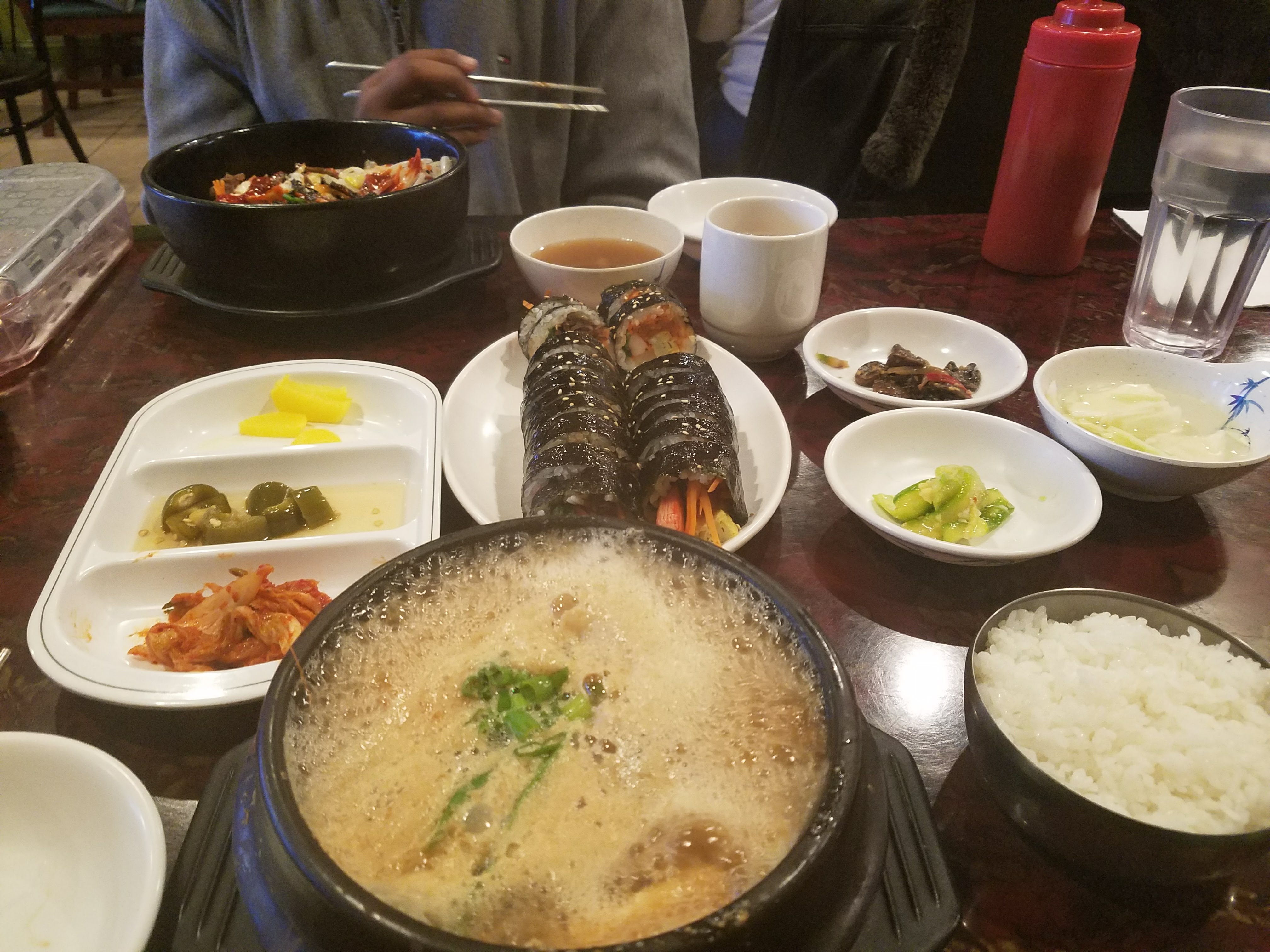 In Ellicott City, Maryland, there is a strip of US Route 40 named “Korean Way.” Only about a half a mile in total, this naming recognizes Koreans’ contributions to Maryland’s economic development and cultural diversity. Although the total Asian population in Maryland is around 6 percent, in Ellicott City it is 24 percent. The Korean population in particular experienced big gains, growing over 30 percent between 2009 and 2014.

It should come as no surprise, then, that Ellicott City is home to countless Korean businesses including grocery stores stocked with Korean staples, bakeries, and restaurants. While a Korean BBQ restaurant may seem obvious, one of my Ellicott City favorites is Kimbob NaRa. A small restaurant at the end of a business strip on US Route 40, Kimbob NaRa serves everyday Korean fare – a variety of kimbab, soups, and bulgogis, among other common dishes. And, I love it for it!

First, I LOVE kimbab. Cooked rice, egg, imitation crab, picked yellow radish, and carrot all wrapped in seaweed. Those are the basic ingredients. Kimbob NaRa has about half a dozen variations – my favorite is chamchi kimbab (tuna kimbab), bulgogi kimbab (marinated beef kimbab) is always a favorite, and of course kimchi kimbab (spicy pickled cabbage kimbab). I’ve found few restaurants that serve kimbab, probably because it is such an everyday food, which is why Kimbob NaRa is so special.

Second, Korean ramen holds a special place in my heart, but you definitely can’t find that at most Korean restaurants. It’s just too mundane. But, you can get it almost ten different ways at Kimbob NaRa. A bowl of ramen with egg and cheese takes me back to studying abroad at Ajou University and lunch time in the cafeteria. A very simple meal, but very delicious and full of memories.

Third, Kimbab NaRa has all of your (or my) Korean soup favorites, including doenjang chigae (fermented bean paste soup, veggies, and seafood), kimchi chigae (spicy, so, so, spicy kimchi soup, tofu, rice cake), soodoboo (silky tofu soup), and yookgaejang (beef soup with vegetables). They even have mulnaengmyun (chilled noodle soup).

When I’m craving a taste of Korea, that home cooking craving, when I need a moment to feed my spirit, I come to Kimbab Nara.