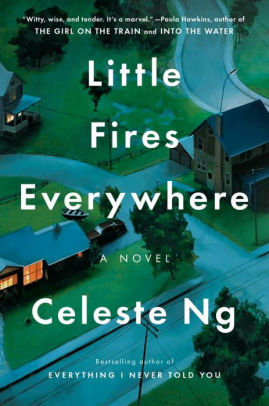 I absolutely fell in love with Celeste Ng’s debut novel, Everything I Never Told You. I knew I had to pick up her second book, Little Fires Everywhere, but with so many fabulous books vying for my attention it hadn’t made it into my hands. As luck would have it, one of my Instagram friends was clearing out her bookshelves, and Ng’s book was one that she was giving away. I had to snag it!

Little Fires Everywhere arrived just in time for it to accompany me on my spring break vacay to Isla Holbox, Mexico courtesy of my spirit sister, Mia. It was no surprise that Mia, also an avid and intentional reader, brought a book along, too. Her selection was the first in Tomi Adeymi’s captivating and adventurous magic-filled trilogy, Children of Blood and Bone (an absolute must read!).

The world of Little Fires Everywhere is an idealistic suburb outside of Cleveland called Shaker Heights, an immaculately planned community populated with high achieving, goal oriented, rule following suburbanites. Yet when Mia Warren and her daughter Pearl begin renting a duplex from Elena Richardson, a series of events is set into motion, threatening to break all the rules holding the Richardson family and Shaker Heights in tact.

Where Elena, matriarch to the Richardson family, has devotedly carried out her well planned life including graduating from college, marrying her college sweetheart, having four children, and a career as a journalist, Mia is a free spirit, an artist roaming the country creating art in each place before moving on, with now teenage daughter Pearl in tow. Whether she means to or not, Mia’s belief in taking action, even if it means going against the grain or grandiose plans, influences those around her – disrupting the ordered nature of Shaker Heights.

Even a free spirit is anchored somewhere, and when Elena and Mia find themselves on opposing sides of a community-wide scandal, Elena is determined to uncover Mia’s past. What Elena finds provides some answers  about her elusive tenant, but ultimately causes Elena to question some of her own past decisions. As more details come to the surface, each member of the Warren and Richardson families is faced with life altering choices.

PAIR IT WITH: a tamarind margarita, not because any of the characters drink margaritas but because that’s how I savored this juicy book… on the beach with margarita in hand.