Malasadas from Leonard’s Bakery, my birthday, and a perfectly timed conference 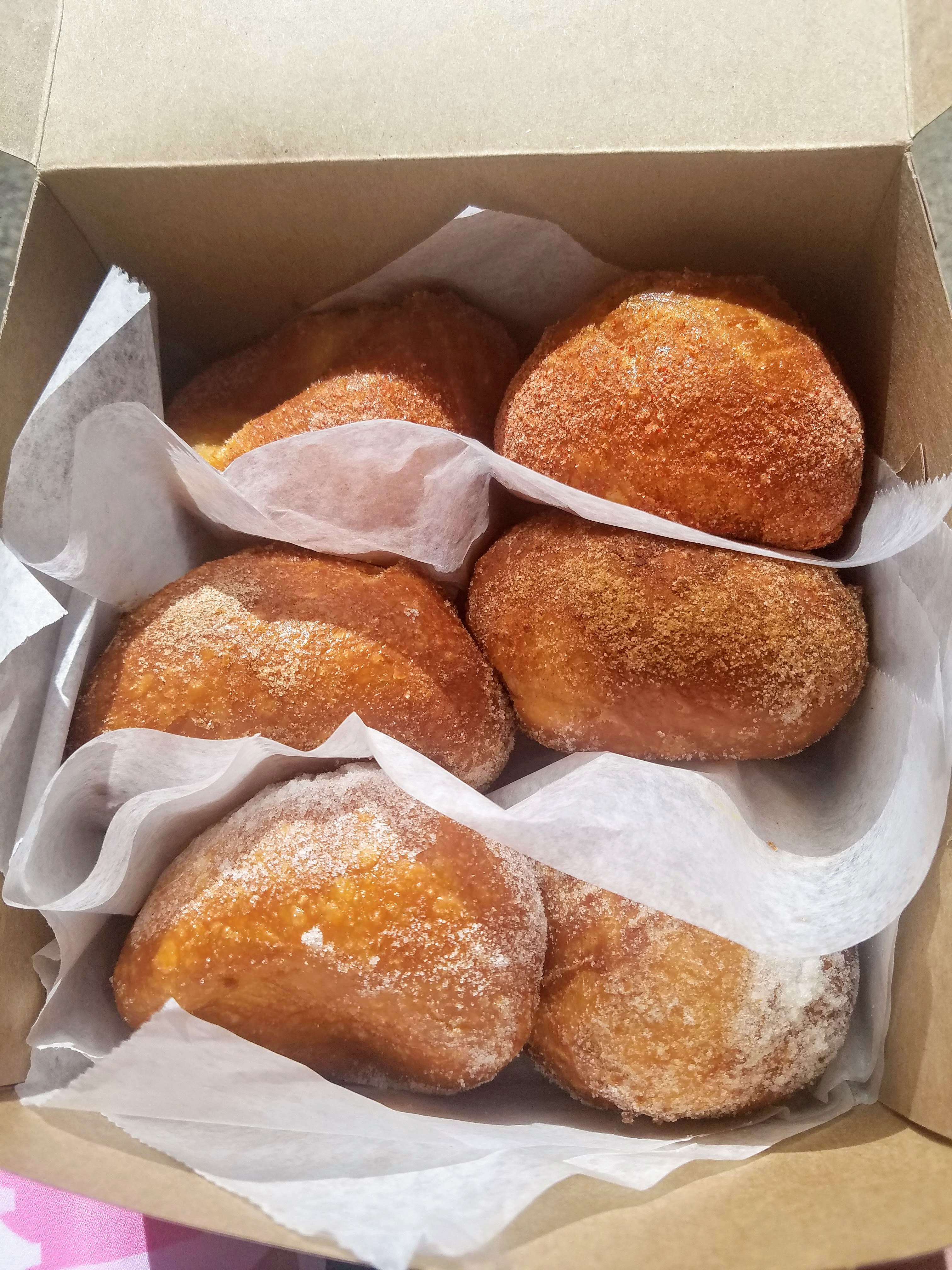 As luck would have it, the Hawaii Sociological Associations’ meeting was the same weekend as my birthday. I took that as a sign that I should spend my birthday in Honolulu and quickly submitted an abstract of some of my ongoing work on Korean adoptee citizenship rights advocacy. With my submission accepted, I booked my flight and excitedly waited for February to roll around.

As the date approached, the weather in Memphis was more and more erratic – 30s cold to 60s mild – and Honolulu’s weather seemed just as unpredictable. Rain and relatively cool temps (for Hawaii) quickly filled the Honolulu forecast. It looked like it was going to rain out my trip. But, lo and behold, the weather cleared as I was traveling. Warm, breezy, and beautiful skies greeted me as soon as I touched down in Honolulu. My spirit was immediately revived. Travel, sociology, birthday, and the promises of delicious foods… just a few of my favorite things all present in one weekend.

After dropping my bags off at the hotel and doing a bit of sightseeing around Waikiki, one of my besties, Aisha, also a sociologist and also presenting at the conference, arrived. We hopped in a Lyft and headed over to Kyung’s Seafood for a celebratory birthday dinner.

I chose Kyung’s Seafood for a couple reasons – the poke was one but poke is, of course, endless in Hawaii, the Korean food was another though there are also plenty of spots for Korean, but what sold me were the soju slushies. If you haven’t had soju yet, then I suggest you go try it ASAP. It’s smooth and delicious and if you get flavored soju, then you will find it extremely tasty and addictive. Aisha and I ordered the strawberry soju slushy and kalbi and poke plate.

The poke was delectable, that is a given. It was the kalbi that was unexpected. It was so freakin good. I cannot even describe how flavorful it was. It was some of the best kalbi I’ve had, which says a lot because I’ve had some excellent kalbi.

The next morning we woke up early to grab breakfast at Liliha Bakery. I read somewhere that their cream puffs should not be missed and who I am to argue with random strangers on the internet? Liliha Bakery was busy, so as we waited for our table we perused the bakery cases. Cupcakes, roll cake, breakfast pastries, and of course cream puffs – coco, chocolate, green tea, and cream. By the time we were seated, I knew I had to have one of each of the four cream puffs. So along with kimchee fried rice with Portuguese sausage, I ordered an assortment of the cream puffs and, of course, coffee. From the look on the waitress’ face when Aisha placed her order for a round of cream puffs, I think the waitress thought we were going to share the cream puffs. Share?! Friends who love food are the best kind of friends!

The cream puffs were everything cream puffs should be. There is no other description you need. My favorite though was the coconut cream puff, I typically don’t like coconut but after this weekend, I may be a coconut convert. My second favorite was the chocolate because it tasted like Boston cream pie, which I love but apparently Aisha hates. Her favorite was the green tea.

But the day of deliciousness was not over! Later that afternoon we went to Leonard’s Bakery. Known for their malasadas, Leonard’s was an absolute must try. I had already added it to my Hawaii Eats list but the Lyft driver from the airport also recommended it and warned me that the line could be atrocious. When we arrived the line was already out the door but the wait to the counter wasn’t terrible.

Since we had cream puffs that morning we decided against the filled malasadas and went right for the classic – one of each of the three flavors: original, cinnamon sugar, and li hing. We grabbed a seat on the stoop outside Leonard’s so we could enjoy our malasadas hot and fresh.

Normally I am a cinnamon sugar type of person (right behind powdered donuts) but I’ve found a flavor that perfectly encapsulates my flavor profile – li hing. Li hing is dried plum powder and is sweet, salty, and a little sour. The li hing malasada was my absolute favorite. I wish I would have been able to eat more.

The next day we rolled out of bed pre-dawn to hike Diamond Head. Sunrises are kinda my thing and I wanted to be at the summit to see the sunrise over Waikiki. It was definitely worth the early morning wake up call. Even at 6am, when the park first opened, there were plenty of people making the trek. As the sun slowly rose over the beaches and lush foliage of the valleys, it was such a sight.

After hiking Diamond Head crater, we grabbed brunch at Koko Head Cafe, which ironically is NOT in Koko Head. By the time we were seated, we were definitely ready to partake in their brunch offerings. The bibimbap was a no brainer for me, and once I heard the dumplings of the day were shrimp and tofu, I was sold on those, too. Aisha had the cornflake French toast, French toast rolled in crushed cornflakes and fried. While we waited for our meals, we sipped on the Queen’s Mimosas – sparkling, elderflower, and guava. As tables around us were blessed with fluffy pancakes, breakfast congee, and poi biscuits and gravy, I knew we had chosen the right spot for our post-hike meal. And, as our orders arrived, that feeling was confirmed.

Bibimbap is again one of those basic Korean dishes but so necessary. It’s the perfect balanced blend of rice, veggies, meat, and spice. What made this bibimbap especially scrumptious was the nurungji, the crunchy chewy layer of rice at the bottom of the pot. The nurungji made me immensely happy. That and the dumplings made this brunch.

While in Hawaii, I also enjoyed Kona coffee, chocolate covered macadamia nuts, chocolate dipped shortbread cookies, and omusubi. Omusubi are triangular shaped rice balls typically with nori but also often paired with pickled plums, bonito flakes, fish, or even tuna with mayo. I haven’t had omusubi in forever, so when I saw Waikiki Yokocho, a Japanese food hall, featured Shichimusubi, a omusubi stall, I had to stop by. I’m pretty sure I had a couple different omusubi everyday. Nana’s Green Tea is also located in Waikiki Yokocho, along with ramen vendors, sushi, and fried food favorites.