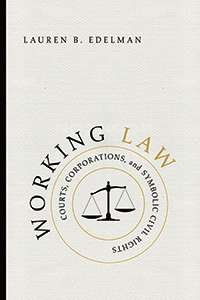 This summer I was awarded the 2018 Robert W. Janes Commemorative Award. This award is given to the top doctoral student in the Department of Sociology at the University of Maryland. In addition to a certificate of award, inscribed name plate added to the Janes Award departmental plaque where I will live on in perpetuity, I also received a copy of the American Sociological Association’s book of the year. This year’s book is Lauren B. Edelman’s Working Law: Courts, Corporations, and Symbolic Civil Rights.

I am looking forward to diving into Edelman’s book once I am settled in to my new job. Until then, here’s the summary of the book from the publisher in case you want to check it out, too:

“Since the passage of the Civil Rights Act, virtually all companies have antidiscrimination policies in place. Although these policies represent some progress, women and minorities remain underrepresented within the workplace as a whole and even more so when you look at high-level positions. They also tend to be less well paid. How is it that discrimination remains so prevalent in the American workplace despite the widespread adoption of policies designed to prevent it?

One reason for the limited success of antidiscrimination policies, argues Lauren B. Edelman, is that the law regulating companies is broad and ambiguous, and managers therefore play a critical role in shaping what it means in daily practice. Often, what results are policies and procedures that are largely symbolic and fail to dispel long-standing patterns of discrimination. Even more troubling, these meanings of the law that evolve within companies tend to eventually make their way back into the legal domain, inconspicuously influencing lawyers for both plaintiffs and defendants and even judges. When courts look to the presence of antidiscrimination policies and personnel manuals to infer fair practices and to the presence of diversity training programs without examining whether these policies are effective in combating discrimination and achieving racial and gender diversity, they wind up condoning practices that deviate considerably from the legal ideals.”