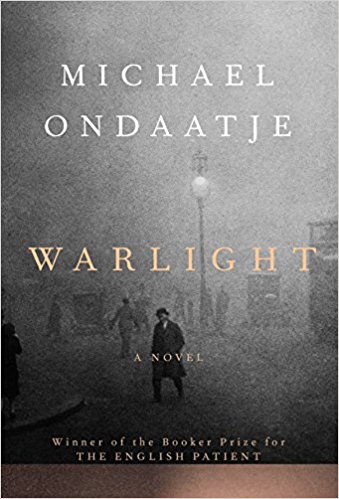 I’ve been really into historical fiction lately. Books have always allowed me to travel to another time and place, fully immersing myself in the reality of the story the author creates, but historical fiction adds another layer to that. I’ve also been reading mainly women writers recently but Michael Ondaatje’s Warlight found its way into my hands.

In his seventh novel, and the first in seven years, Ondaatje tells a coming of age story about a boy named Nathaniel. It is 1945, London, and Nathaniel, 14, and his sister, Rachel, 16, are left under the care of a mysterious man who lives in their attic. Their parents must go to Singapore for work but only for a year, they assure them. Of course, their parents are gone much longer than that. Nathaniel’s and Rachel’s lives are no longer under the control of their parents but their new caretaker, a man they call The Moth for his “moth-like movements,” and his eccentric cast of friends. Who is The Moth, why have their parents entrusted them to him, and who are these colorful characters coming and going from their home?

After finding the trunk their mother so meticulously packed hidden under the stairs, where their parents went and why becomes one more mystery for Nathaniel and his sister. It is revealed that their mother is doing postwar intelligence work. The Moth is a colleague and so are the many curious characters who gather in their living room. Throughout the rest of Warlight, Nathaniel provides a memoir-like retelling of how he has come to be who he currently is.

“So we began a new life. I did not quite believe it then. And I am still uncertain whether the period that followed disfigured or energized my life…I suppose there are traditions and tropes in stories like this. Someone is given a test to carry on. No one knows who the truth bearer is. People are not who or where we think they are. And there is someone who watches from an unknown location.”

Where the first part of the novel follows him in adolescence, in the second part, it is 1959, and a 28-year-old Nathaniel, now working in intelligence himself, is piecing together the choices and characters that shaped his life after his parents left. Also central to his search is the truth about his mother – who was she, where was she working, and what happened to her?

As the events of the first half of the novel come into focus, through Nathaniel, Ondaatje explores the role of memory. “You return to that earlier time armed with the present, and no matter how dark that world was, you do not leave it unlit. You take your adult self with you. It is not to be a reliving, but a rewitnessing.” Nathaniel’s rewitnessing elucidates the excitement and terror of his youth, and in his rewitnessing, his personal retelling, creates a foundation for his future self. This whole act provides the reader a launching point into her own rewitnessing. In doing so, Warlight does the best of writing – transporting the reader into another world while telling her more about her own.

PAIR IT WITH whiskey with a splash of water.

Author: Eat Eat Read Admin
Filed Under: Reads
Tags: book club, boyhood, coming of age, historical fiction, war
The Soul of an Octopus: A Surprising Exploration into the Wonder of Consciousness
Far from the Tree: Parents, Children, and the Search for Identity
Searching is in progress