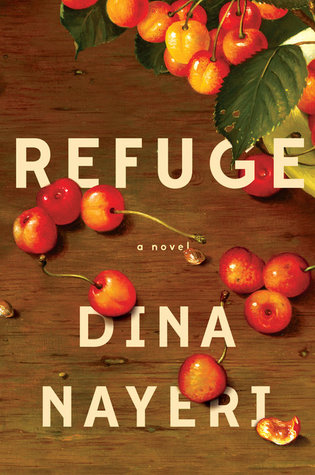 Have you ever picked up a book and just known, just by looking at the first page, reading the first few lines, that it was going to be a good read? A read that demanded your undivided attention? That deserved it? That’s how I felt when I opened Dina Nayeri’s Refuge. So much so that the first time I began reading it, I put it back down to wait for a time when I could really savor this book.

I found that time on a recent trip to NYC. It may sound counterintuitive to read a book while in the bustling Big Apple but the train ride to and from DC to NYC as well as the wait to board the train provided the time I needed to sink into this story.

In Refuge we meet Niloo and her father, Bahman. As a young girl, Niloo, her mother, and brother, flee Iran while her father stays behind. Over the next two decades Niloo and Bahman meet five times in fives different countries. Refuge tells the story of the parts of their lives that move forward in the times they are a part and the struggles of seeing one another grow beyond their last memories of each other.

Through Niloo and Bahman, Nayeri tells a story about family and belonging, care and community. Each time Niloo and Bahman meet, Niloo matures a little more until at last she is a sophisticated, college-educated, dual passport-holding woman making a home in Amsterdam with her French husband, Gui. Niloo is exacting, detail oriented, controlled – a response to her life in exile.

Now it seems her life is divorced from all traces of her childhood – Iran, her father. But soon she finds herself enmeshed in a Persian refugee community, where stories and meals are shared. As Niloo becomes more immersed within her new found world, her carefully crafted persona begins to chip away and her longing for the nearly forgotten tastes and sounds of her early childhood break free. Niloo finds the piece of herself that she’s suppressed and now the life she’s created seems out of place.

In Niloo and Bahman’s travels and homes they create, Nayeri crafts a story about family, immigration, and nation-building. In some ways Refuge is a coming of age story and in others a coming to. Along the way, Nayeri guides her reader to think about the complexities of their own family and belonging.

PAIR IT WITH Persian lemon soup  (dried limes and tumeric create its distinct taste), the soup that Niloo first eats with the Persian community in Amsterdam.