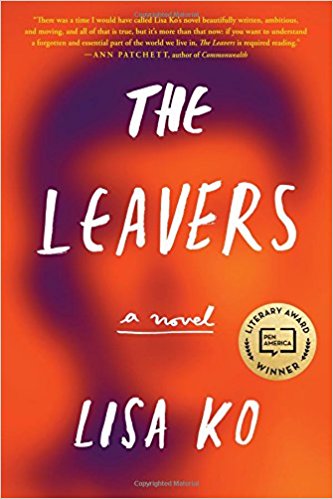 When I selected The Leavers as my next book to read, I didn’t know that I was picking up a book about adoption. All I knew was that there was a buzz around Lisa Ko’s book, and it seemed like it would be an interesting read. So I was surprised to find transracial adoption so central to her story but also impressed with the authenticity of her portrayal.

“Oh are we crazy? Having him live in a town with no other Asian kids? I wouldn’t blame him if he hated us.”

“I’m not going to say it’ll be easy,” said Peter. “But white, black, purple, green, kids of all races have struggles with belonging. They’re fat, or their parents don’t have a lot of money.”

“That’s true,” Kay said. “I was a bookworm with glasses. I never belonged in my hometown.”

As I read this exchange between the two white adoptive parents, I began to laugh. Not because what they were saying was funny, but because I had just defended my dissertation earlier in the week and discussed the colorblind approach my respondents’ parents’ took to their upbringing. This exchange was so similar to ones my respondents shared that I felt as though Lisa’s words were ripped from the pages of my research.

The transracial adoption experience of Daniel Wilkerson née Deming Guo is a central part of The Leavers, but how he comes to be adopted by Kay and Peter Wilkinson, two professors living in a small town in up-state New York, is just as important. Unlike the nearly half a million transnational transracial adoptees, Deming is domestically adopted. Born in New York City, Deming is Chinese American, but his mother, Peilan Guo (later in the novel Polly Guo), is undocumented.

Deming and Peilan live in the Bronx with Peilan’s boyfriend, Leon, Leon’s sister Vivian, and nephew Michael, who is the same age as Deming. When Peilan brings up the idea of moving to Florida, both Deming and Leon are resistant. The next day when she doesn’t return home it seems like she may have gone without them. Eventually Peilan’s absence leads Vivian to relinquish Deming to the state, and he is adopted by the Wilkinsons.

Up-state New York is like another planet in comparison to the sights and sounds of the Bronx. Daniel is the only Asian student and one of only two students of color. Reflecting on his first few days at his new school:

“Here, they paid too much attention to him and later, they would pay no attention to him. It was that kind of mindfuck: to be too visible and invisible at the same time, in the ways it mattered the most.”

Throughout The Leavers, Daniel struggles with being truly seen – by his family, his peers, and even himself – and reconciling where he belongs. He tries to be a good son to the Wilkinsons and a good friend to the few friends he manages to make but he finds himself repeatedly failing to live up everyone else’s expectations while simultaneously being unable to define for himself what he wants. After one too many failures, he moves back to New York City to pursue music much to the chagrin of his adoptive parents. While Daniel attempts to find his own path back in his hometown, it is an out-of-the-blue email from Michael that ultimately sets his self-discovery in motion.

As Daniel reunites with his first family – Micheal, Vivian, Leon, and eventually his mother – we learn what really happened the day Peilan did not come home from work. Peilan’s (now Polly’s) story is one of terror, strength, and constant self-redefinition. As Polly relays the ups and downs of the years that she and Deming have been separated, we learn with brazen honesty Polly’s struggle with balancing others’ expectations of who she should be and what she should want and her own dreams.

The Leavers gives us insights into the intricacies of family life and growing up. But more than the personal story of fictional characters, The Leavers provides glimpses into the realities of immigration and adoption.